From Katrina Hall, She’s In the Kitchen Blog

It’s actually not super hot, but it does have a nice bite to it. I found the peppers I’d dried last fall, and picked out a few nice red ones. 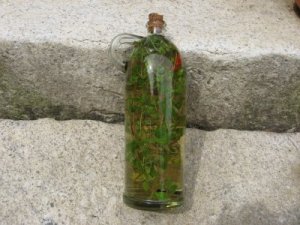 Here are the basics:
Always use glass containers for vinegars – and if they have metal tops, fold a piece of plastic wrap between the cap and the vinegar when you close it tightly. They will rust if they come in contact with the vinegar.  I use half white vinegar, half apple cider vinegar. It’s light and doesn’t overpower the herb flavors.  Steep vinegar with herbs in sunlight for a week, then strain through a coffee filter or cheesecloth into a very, very clean bottle. Discard the first set of herbs, and, using a chopstick, arrange the herbs as you wish in the bottle before putting the vinegar in. If you use dried spices, like the chili pepper, they will plump up as they soak up the warm-from-the-sun vinegar. I reuse the same chili peppers on the final bottling, but discard the oregano.

To make the chili vinegar:
Fill clean bottle with snips of fresh oregano – both small and long.  Place a few black peppercorns in the bottle, and then drop two chili peppers in.  Slowly fill with vinegar and cork tightly.  Let sit in sun for a week.  Strain the vinegar, using a coffee filter, into a pitcher.  Take a clean bottle and fill with snips of oregano, peppercorns, and the now plumped chili peppers from the first steeping.  Fill with the strained herb vinegar.  Cork tightly and dip into some melted paraffin so it doesn’t leak.  Keep in a dark cupboard for best results.

Some other wonderful herb vinegars I’ve made are:
Chive Blossom – a gorgeous magenta color! You must fill the jar with the blossoms to get that color, and keep in a dark cupboard so it doesn’t fade. Purple basil also makes a magenta vinegar.

A Website to Feed You & the Monadnock Region Food System